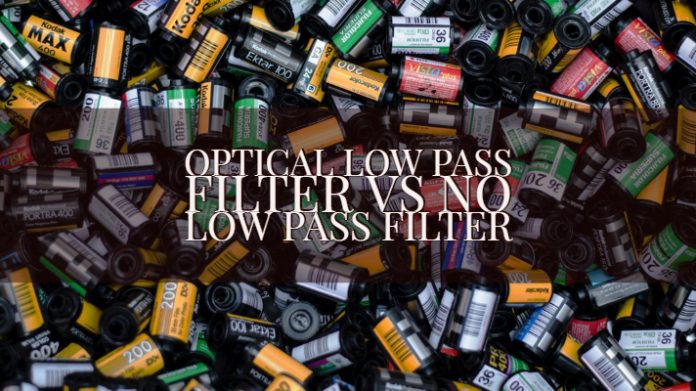 A host of digital camera sensors opt for “Bayer pattern.” These sensors employ a 2×2 pattern in a mosaic pattern. These contain one red, one blue and two green sensors. The same pattern is repeated for creating multiple sensors of different shapes, sizes and megapixel counts. While producing images, the sensor makes use of what is called demosaicing.

This creates a Moire effect and digital artifacts. What exactly is the Impact of Moire? Well, it is something you may have noticed when watching your older TV. When your presenter on your TV is wearing a striped dress, you will see that there would be a mismatch or overlapping of the colors. If you have been toiling on a tar road on the hot sunny afternoon, you will notice the same kind of effect when you look at the far away portion of the line of sight. To understand it still better, take a snap of your laptop or PC screen using your smartphone camera. Did you notice those colored lines? That is precisely what we technically refer to as Moire effect. The effect is also referred to as Aliasing. It is necessarily a phenomenon where the reproduced image produces false colors.

An Optical low Pass filter – A Solution to Moire Effect 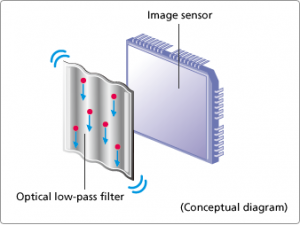 How does it work? Well, it works through a simple procedure. Camera manufacturers employ an optical filter for the purpose. The filter is used on top of the sensor and comes with three layers. The first layer would displace the image slightly in a horizontal direction. The second layer used in the filter would be used for filtering the infrared radiation. The third layer replaces the sample image slightly vertically.

All these effects together would remove the effects of aliasing and Moire effects. However, do note that these changes can affect the image resolution. Your image will be blurred, and as we are well aware of, no one likes blurred images – right?

The No Low Pass Filter revolution

Camera manufacturers have been using the anti-aliasing filters or the blur filters since long to do away the false colors. However, the lack of details is what would make it an unwanted evil in most cases.

That is precisely what would explain the decision of a few camera manufacturers to opt for no low pass filters. On the forefront of this revolution is Nikon, which introduced the concept of no low pass filter way back in 2004. How and why would they do it?

While anti-aliasing is one of the features that would appear to be an excellent option under a few conditions, it remains an evil by no means. Why? Because the pictures get blurred and there is a considerable loss of resolution.

The functionality is quite an efficient one, but if you are someone involved in the landscape photography – you will find that the lack of sharpness is a significant concern. You are not affected by the Moire effect or the false colors, but with the option available by default on your camera you will end up with the lack of details. Nikon introduced the Nikon D800E with no low pass filter keeping the landscape photographers in mind.

How Does No Low Pass Filter work?

Whether a camera manufacturer is opting for anti-aliasing or not, they need to choose for filtering the infrared radiation. That is where Nikon makes use of a particular filter just the way the low pass filters are used in conventional camera sensors.

Again, it offers you a filter with three layers. The first layer would displace the image vertically by a slight margin as in the case of AA filters, the second layer filters the infrared radiation, and the third layer would cause a vertical displacement. But since the third layer is reversed, it would negate the effect of the first layer. You will end up with no loss of sharpness.

Which One Should You opt for?

Well, that is a debate that has been around for over a decade now. Some purists do not want any loss of resolution. For them, the lack of clarity due to a low pass filter is a definite no go.

However, some people would support both the camps. They have their reasons for going in for the low pass filter or against it. Lack of resolutions and sharpness can be considerable concern in advertising and landscapes. Of course, you would face a few issues like Moire and false colors. But, they can be corrected through the post-production processing. If you are a medium level shooter, a high degree of post-production may be a big issue.

The perfect choice would be dependent upon what exactly you are looking ahead to and which genre of photographers do you belong to. The new breed of camera users has, however, been focussing on opting for a better resolution than worrying about the Moire effect. Access to more natural photo processing tools and high-resolution sensors have considerably addressed and minimized the issue of false colors and Moire issues.

The focus is shifting towards no low pass filters, and though the numbers are quite little as of now, we would indeed expect a vast amount of people supporting the higher resolution. However, the right choice for you would be utterly dependent upon your preferences. Choose the camera that offers you the right feature for your taste and style of photography. 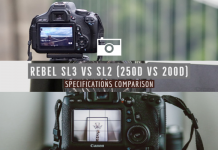 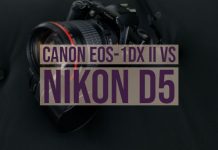 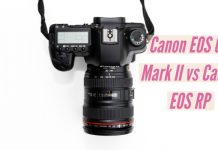 Das - March 30, 2020
0
If you are looking for the battle of the Full-Frame mirrorless cameras, check out our Panasonic S1H vs Blackmagic Pocket 6k vs Sony A7R...

List of Phones with IMX586 Sony Sensor – Budget and Premium...